Wendy’s: widely known for its fast food, but also known for their quick-witted Twitter page. If you haven’t followed the page, what are you doing with your Twitter account? The restaurant chain consistently serves sass on this platform, posting multiple times a day and frequently responding to mentions. People don’t just follow this account for information on deals, they follow for quality entertainment.

Here’s some key takeaways on why their account preforms so well:

Their food isn’t roasted, but their followers are. Wendy’s frequently replies to Twitter mentions and unapologetically teases their 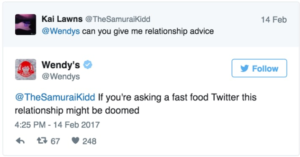 following, leaving more people eager for the hilarious attention. Wendy’s responds often enough that many people find it worthwhile to bait the account, as you can see in the following hysterical interactions:

2. Unique spot in the market

Consider their competition. Wendy’s is clearly filling a different role than their cheery counterpart: McDonald’s. Wendy’s has taken a spunky role that would never be believable for the “I’m lovin’ it” brand. By identifying their own, previously unoccupied space in social media, and carefully crafting consistent, engaging messaging, Wendy’s created a role that they can’t be outperformed in. 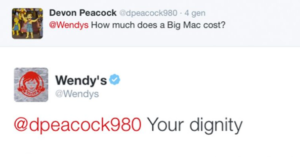 Wendy’s has built a brand voice for the red head that is bold and unwavering. The voice is reliable and carries over to all of their responses and posts. Therefore, it is real to their audience, leaving them craving more of her unmatched humor.

Brave, quality content can have a large return on social media. Their competitors, Burger King and McDonald’s, might serve a 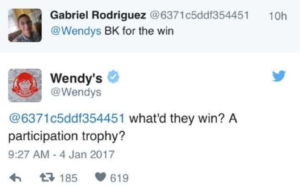 similar menu, but it’s unlikely they dish it up with the same spice and sass as witty Wendy’s social media. This helps them stand out from the pack. For instance, my friends and family have brought up Wendy’s Twitter page, which I can’t say for their competitors or many other businesses in general. 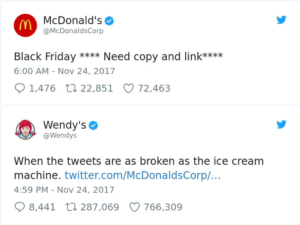