With every election comes a wave of political rants and sassy e-cards about opposing parties and issues. With the ability to “Like” organizations as well as befriend users, Facebook has become an outlet to not only let the world know what you had for lunch today, but also to re-post your “Liked” organization’s daily political snippet. Opinions seem to be divided on whether Facebook is an open arena for freedom of speech, or etiquette would dictate that users censor their posts.

On the one hand many believe that participating in social media means that users have accepted this aspect of communication and should accept it without complaint. Some even enjoy a charged Facebook debate and those conversations can certainly be entertaining to read. While Facebook is an avenue to connect with others, the status feature allows the user to express what’s on their mind, which many times may include political issues. As a user of social media, accept that this is going to happen.  Read the posts – or don’t -and move on with your day.

On the other hand, others believe that etiquette should censor user posts. Sensitivity should play a role: keep posts friendly enough, keep discussions lively but not insulting, and unfriend the person if the debate gets too intense. Personally, I have had friends worry that others will see their friends offensive Facebook posts, and assume that they agree with them because they are friends. Users also run the risk of simply annoying friends with constant offensive posts that they are not interested in, resulting in posts being hidden from friends newsfeeds, or simply being unfriended.

Whatever your opinion do not forget the golden rule of social media, whatever you put out there will most likely be able to be found in the future. No matter what your privacy settings, chances are that future employers will be able to view that passionate spur-of-the-moment post in the future. I say support expression, but be wary of the risks. 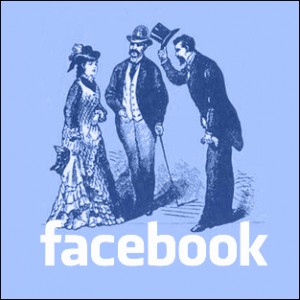