Hot Dogs in Your Pizza Crust, Anyone?

My fascination with Pizza Hut runs long and deep. It started when I was a kid, and Friday night family outings were elevated to another level when we went to Pizza Hut, had a Supreme Pan Pizza, a pitcher of Diet Pepsi and permission to insert as many quarters as we wanted to into the Pac-Man machine.

Nowadays, my husband will attest to my giddiness every time the R & D department at Pizza Hut comes up with something new. Working in a Cincinnati marketing communications agency, I now have a whole new take on the Hut.

Ponder this for just a moment:

Every other big pizza chain (Domino’s, Papa John’s) is playing in the “we make great pizza” space. Whether they actually MAKE great pizza is a matter of opinion. But for the most part, that’s what their advertising focuses on. Domino’s even rolled out an award-winning, game-changer ad campaign a few years ago that admitted “Yeah, we hear you. We made some terrible pizza. But not anymore.”

But Pizza Hut, on the other hand, prides itself in being the pizza innovators. Sometimes memorable, sometimes forgettable and sometimes just plain weird, consider the products Pizza Hut has marketed in recent years:

• Cheese-stuffed crust (which increased sales by $300 million the year it was introduced).
• A pizza you could separate into four different quadrants of toppings. Everyone is happy! And it was hawked by The Muppets AND Jessica Simpson!
• The Big Dinner Box pizza, that’s like one of those well-organized trays of airplane food on steroids: a neatly-arranged box containing two medium pizzas, five breadsticks, “Tuscani” pasta, wings, “Stuffed Pizza Rollers,” a partridge in a pear tree and a two liter of soda.
• Tiny pizzas they all “Pizza Sliders”
• The “Bigfoot” pizza, which weighed something like 22 pounds and they’d deliver to your door. Advertised in a commercial with Haley Joel Osment before he saw dead people.

And now, it’s the Crazy Cheesy Crust pizza.  Because apparently, we don’t just want to eat pizza. We want to envelop ourselves in cheesiness and roll around in it.

Pizza Hut takes an interesting tact in their competition with other chains. It certainly must make being a marketer for them more interesting and challenging. Say what you will about the pizza chain, they can’t be accused of remaining stale. Anyone remember the 2012 Pizza Hut room deodorizer? 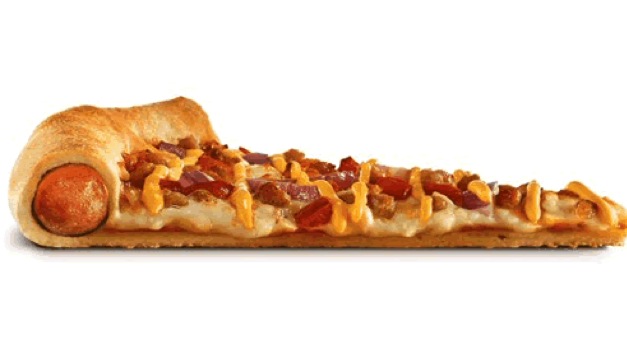