I’m a late adopter of technology. Blame my solid Midwestern roots (“mmmm, I think I’ll wait to see how that pans out for the rest of you before I jump on board.”) Or blame my frugality. Or just blame my overall tentativeness with technology as a whole (must the laundry machine have so many settings?)

Whatever. The fact remains that I don’t own an iPad.

But now, in its fourth generation, I am very, very intrigued. I think I’d use it for e-mail, social media, reading, running my family’s daily needs, watching TV shows…this is what people use it for, isn’t it?

I’m also feeling spurred on by my son. iPads were used in a pilot program in his first grade classroom. The school district concluded that going forward, elementary school students will use iPads in the classroom starting in the second grade. Parents will pay an annual fee, higher if the student needs to use a school iPad, lower if the student will bring one from home.

So far, I’ve yet to hear from a parent who plans to send his/her seven-year-old to school with a $500 piece of technology when the same kid can’t even tie his shoe or open a cheese stick at lunch.

But, I now feel an innate sense of curiosity about this technology that my children are being exposed to at such an early age. Is this what it felt like in 1920-something when parents sent their daughters to secretarial school to learn to type on a typewriter?

The jury is still out. By the time the iPad 12 rolls around, I suspect I’ll be on board. But I welcome your advice in the meantime.

Update: I now have an iPad. Apparently, shamelessly requesting over and over again will eventually lead hubby to crack and surprise me with requested gift. The iPad has made my children smarter, my work life more efficient, my thighs thinner and the cats now clean their own litter box. Most of these are lies. Ok, all of these are lies. But it’s still cool. 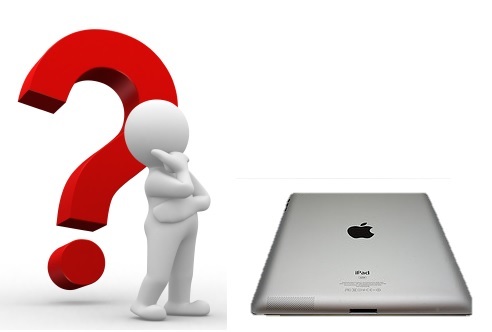