I’ve flown with you dozens of times, you’ve gotten me to where I need to go safely and I’ve had some good adventures. And your flight attendants have been mercifully patient when my husband and I were Those Parents who nervously packed way too much in carry-on luggage for fear the baby would, well, I don’t know, need to change his clothes 39 times during the flight.

Last year, I delightedly watched the new in-flight safety video. It’s fun! It’s quirky! It made me giggle! My favorite “no-smoking-on-the-airplane” redhead was back for a cameo! And if you pause when the video gets to 3:09, you get to see Abraham Lincoln. The only reason I know this is because as I scrolled through the hundreds of positive comments about the video, I saw our sixteenth president mentioned repeatedly.

It’s worth noting that normally safety videos aren’t fun. They certainly aren’t something that people typically write positive comments about on YouTube. Score one for you, Delta!

Around Christmas, a holiday version of the safety video was released. Brilliant! There was a nutcracker trying to find a place to store his giant hat (you should’ve checked it before you boarded, soldier); Ebeneezer Scrooge rudely declining to sit in an exit row, an Elf on the Shelf looking all mischievous in his seat and Santa helping an elf into an oxygen mask.

Icing on the cake has to be Delta’s latest iteration of its in-flight safety video. It has received a make-over, 1980s-style. It features Alf, Teddy Ruxpin, Devo, leg warmers, a guy doing the worm, Atari, a guy trying to get tape back in its cassette, and a whole host of totally, like, awesome fashion choices. Oh, and my favorite “no-smoking-on-the-airplane” redhead portrayed by a 7-year-old.

Ever in the marketing mindset, I had my face pressed up against the window during my recent Delta connection in Atlanta, checking out the branding on the tarmac. Every service truck had a billboard on its side that said “PROUD TO CALL ATLANTA HOME.”  The employee shuttles zipping among the gates were emblazoned with signs that said “THE MOST ADMIRED EMPLOYEES IN THE WORLD ARE IN HERE,” referring to Delta’s recently being named “Most Admired Airline” by Fortune magazine.

Well done, Delta. You’ve created a brand that’s approachable and authoritative, while being personable and funny. Not an easy thing to do for any company, let alone an enormous global airline. It takes guts to allow marketers to go out on a limb like this. We’re grateful you let them do it. 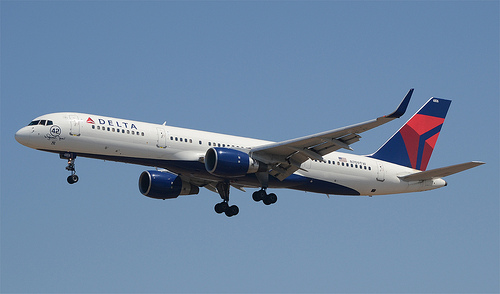