I recently received an email from Pottery Barn. And the subject line sounded as confused as we, the consumers, tend to feel this time of year:

First off, it was September 12. A full six weeks before Halloween, never mind two and a half months before Thanksgiving. As for the Christmas mention tossed in? No wonder our heads are spinning.

Turns out, retailers can be forgiven for some of this.

According to the National Retail Federation, a record-setting 71.5% of Americans planned to celebrate Halloween in 2012, up from 68.6% in 2011 and 64% in 2010. Total Halloween spending was expected to reach almost $8 billion, a healthy increase from the $7 billion spent the year before.

Halloween has exploded  from a holiday that saw families purchasing (or often making) a couple of kids’ costumes, a few bags of candy and maybe a paper skeleton for the front door, to a multi-billion dollar industry where consumers purchase 15-foot inflatable grim reaperand pumpkin carriages  and $300 pumpkin wreaths for the front door. My own front yard proudly displays an enormous inflatable jack o’lantern every October. Why not? It’s fun.

But how to best market all three holidays in three months without overshadowing any of them?

My conclusion is that it can’t be done.  We want to fully enjoy each and every season. We want to wallow in fall, digging out cozy blankets, walking in crunchy leaves and carving pumpkins. We don’t want our Christmas oozing into our Halloween. Christmas starts when Santa is the caboose in the Macy’s Thanksgiving Day parade, and not a moment sooner, thank you very much.

Now, it IS nice to be able to buy ahead. I start shopping for my husband’s family’s Christmas gifts early because we see them each Thanksgiving.

But Christmas trees in September? No. Unless you are Macy’s. Then apparently, yes.

Unfortunately, as retailers try to extend the various shopping seasons as long as they can, they create behavior in consumers that forces us to shop earlier and earlier for items.

Case in point: early last August, I took my children shopping for school supplies. Normally able to be completed in one stop at Target, I ended up at four different stores because the shelves had by that point already been cleared of the most-needed items.

And in late November, we hung Christmas lights on the outside of our house. A few strands had ceased to work, so I went to five different stores to look for new ones before I finally gave up and we left the front porch half-lit until January. (I know, I know, I could’ve ordered online. But I didn’t want to).

So I put an appointment in my calendar to remind me to buy the new lights in late October of the following year. Seriously.

At the end of the day, I love everything there is to love about these three separate holidays. And I suppose my wish for them was that each season was somehow just a bit longer so we could revel in them individually. 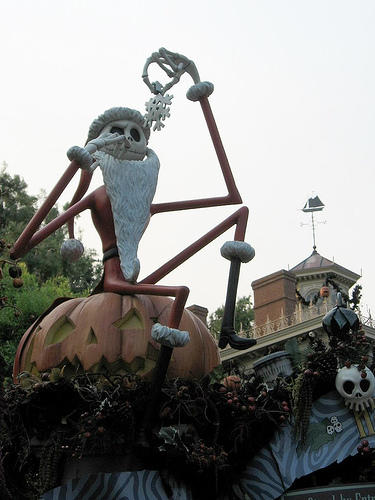