Chobani is a relative newcomer to the yogurt game but has already become the de facto mac daddy of the industry. Founded in 2007 with less than $1 million in loans by a 40-year-old Turkish immigrant, the company has since grown to exceed $1 billion in sales. Before Chobani, Greek yogurt sales in the U.S. were nearly unheard of, but they now account for one third of all yogurt sold in this country. Chobani ran its first television ads during the 2012 London Olympic games, but had to pull them when the supply couldn’t keep up with demand.

If Chobani is the mac daddy of Greek yogurt, then Dannon is the granddaddy. Not to be usurped by an upstart, Dannon introduced Oikos, its own Greek yogurt, and signed Greek-American actor John Stamos and Full House alum to sell the stuff using unabashed sex appeal and good looks.

Chobani is taking a less traditional route, as it has through much of its young history (case in point: the founder still has every consumer message forwarded to his personal cell phone).  During the 2014 Super Bowl, it introduced a belligerent grizzly bear that is hell bent on finding something wholesome and tasty to eat. After ransacking a small town grocery, the hungry fella finally finds some Chobani and all ends well (especially for the town’s residents)

In a great example of brand personification and expansion, that nameless bear is now regularly tweeting Chobani customers and loading videos to YouTube. He tweeted Katy Perry with a video. He tweets everyday Twitter users with videos.

Recently, Chobani set an unnervingly real-looking mechanical bear loose on the streets of NYC and terrified some people and connected with others. I wonder if Dannon can do the same with John Stamos? 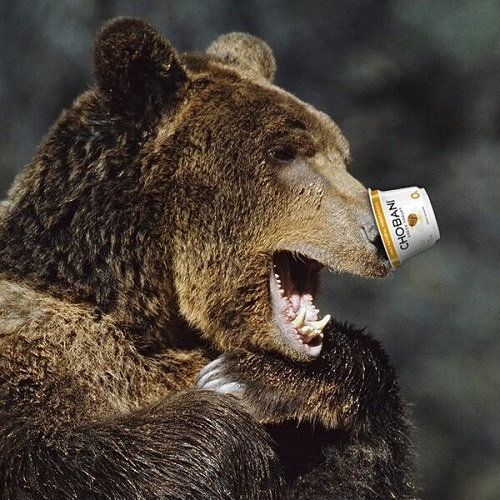