The Challenge: To encourage drivers of the Brent Spence Bridge to “Know Their Lane” and “Plan Their Drive” to avoid traffic on the bridge by seeking other routes.

Our Solution: Once we got the “green light” on the 2017 maintenance, our team had three weeks to develop an identity, build a website, create Twitter and Facebook platforms, create an e-newsletter, plan a press conference, train spokespeople and manage all media relations (including serving as spokesperson) for this intense 60-day project. The 2021 maintenance project came shortly after the emergency repair, but had more planning lead time and our team already had years of experience and knowledge to apply to the communications.

The Results: With the successful video partnership and public response to the content, the 2021 repair featured great video updates and a recap. Our 2017 plan generated 104 million print and digital media impressions, nearly $2.2 million in broadcast publicity value, 750K impressions on Facebook and Twitter and 86K website visits. In addition, almost 1,200 people signed up for the e-blast updates. As a result, on the first day of lane closures when it was predicted that rush hour traffic would be backed up for miles, traffic was virtually the same as a normal rush hour. Every TV station called us to then ask why it wasn’t a nightmare. The ABC affiliate ran a story that said the public information campaign worked: people took alternate routes as recommended and included our website hits and social media information as part of the story. We were very excited to support our client in this monumental task of communicating with the 140,000 drivers who cross the bridge every day and our work won a PRSA award. 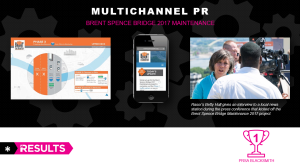